In March 2014, I had the great honor to participate in a conference focused on Benjamin Rush and sponsored by the McNeil Center on Early American Studies. The conference took place in Dickinson College, an institution originally founded by Rush himself that is located in an idyllic setting of western Pennsylvania. The timing was not the best: I was a week away from submitting my dissertation, so the entire trip I couldn’t help but worry about all the editing I was missing. But the conference itself was quite rewarding. It was one of my first chances to test out my dissertation’s ideas before a smart audience and get critical feedback. This seemed all the more important since the paper was drawn from my dissertation’s first chapter. These were the ideas that framed my entire project.

My paper rightly received a lot of pushback. It was still raw. But the suggestions and critiques helped guide me in new directions. Even if there wasn’t enough time to make substantive changes to the dissertation, I eventually rewrote the entire first chapter when transforming it into a book. I’m currently making final edits on that manuscript which is due in just a few weeks. (Debbie, if you’re reading this: I promise I only have two chapters left!) The book should appear next year, and the Rush conference was crucial in helping me re-vision it.

And I was both thrilled and honored when my paper was accepted to be included in the conference’s proceedings, just published in the phenomenal journal Early American Studies. The issue’s editors, Sari Altschuler and Christopher Bilodeau, were immensely patient and helpful as I went through several rounds of revisions. I’m thrilled with the final result, which can be found here. (If you don’t have institutional access, let me know.) Here is a summary:

Benjamin Rush argued for particular forms of union and nation at the very moment those political concepts were undergoing an evolution. The Age of Revolution introduced new ways to imagine federal bodies and governing constitutions, and Rush and his contemporaries were forced to adapt accordingly. This essay examines how Rush and one of his colleagues, Noah Webster, addressed the problem of nationality at the moment of America’s independence in order to investigate the tensions of cultural continuity during a moment of political disruption. In a nation full of so many diverse populations, how was it possible to conceive of a governing structure that matched the character of the governed?

Publications are excited on their own, but this one’s especially so because it’s the first published material based on my forthcoming book.

And here’s a promotional flyer: 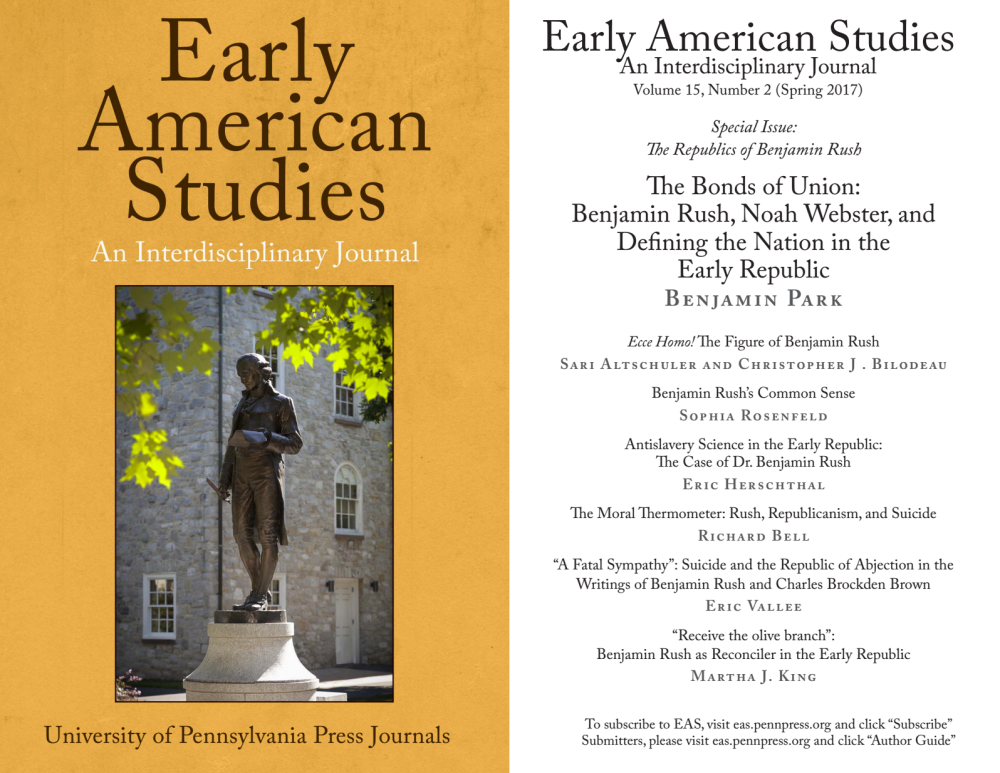